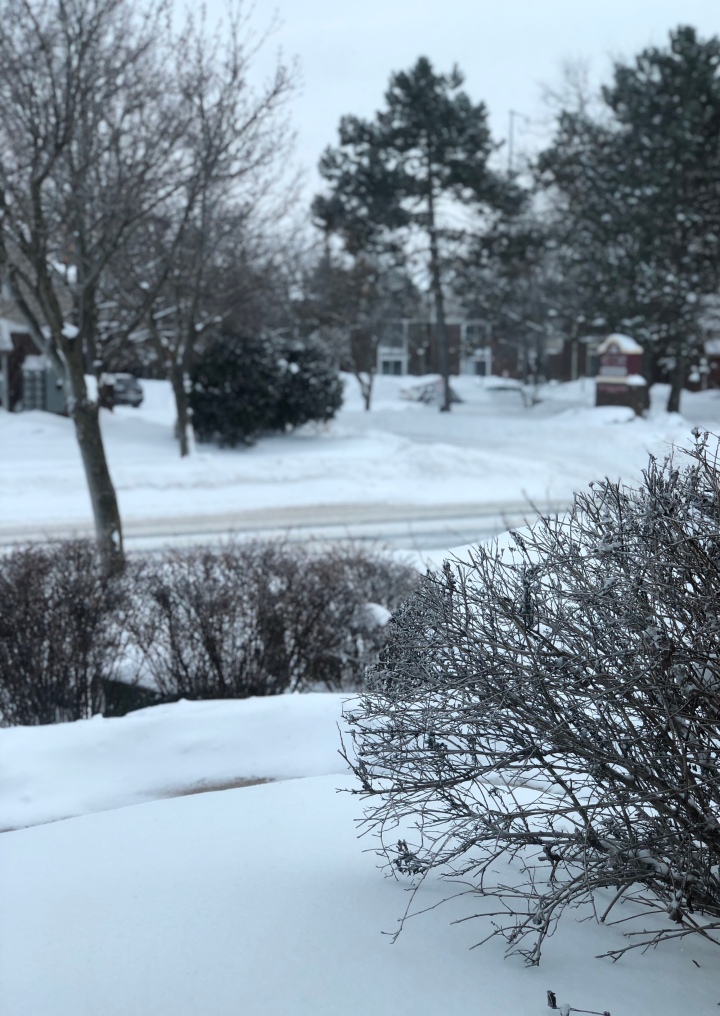 We’ve had some trash weather lately (see image for my MIA patio) but, that just means that I have more of a reason to stay at home and wear comfy clothes!

I’ve never thought I could be a work-from-home kind of person–I prefer to keep my personal life separate from work. While not a usual occurrence, there have been a couple days this winter where I’ve worked from home due to snow. Oddly, I find myself to be even more productive, both with my workload and my personal to dos, on these days.

I’ve been trying to figure out how to keep the productivity going throughout the week when these days come up. While it’s still a work in progress, here’s some of the things that I’ve found to help:

Hopefully, 2019 leads me on the right path to discovering just what exactly I need to be my best self. Here’s to a year of learning, growth, and productive personal time.

It seems I’ve been in a rut the last few months while trying to wrap up the year. 2018 hasn’t quite gone as planned, and while it’s been an adventure, trying to keep track of everything I managed to get done and things I’ll have to push to the new year has taken its toll.

2018 has brought a lot for me personally. Both in experiences and personal accomplishments! I drove all over the country in my little civic, from Wisco to Mass to Jersey all for some weddings, and then to do it all over again and drive from Wisco through Iowa, Nebraska, and Colorado just to see Phish at Dick’s for Labor Day weekend. I’ve worked on journaling a little bit more than I have historically–and by that I mean maybe once a month I remember to write something in a notebook and call it a journal. We also adopted a kitten, Wilson, to entertain Sal… that’s still a work in progress but it’s been a blast so far.

This year, I submitted work professionally and received acceptances! In college I tried to pigeon hole myself into writing fiction exclusively, but thankfully I came to my senses and have allowed myself to explore. I had submitted some stories to a couple of magazines and either was rejected or didn’t hear back. I’ve found that I struggle to let go of and see my short stories as “ready”, even after years of revision. On the flip side, most of the work I had published this year was poetry! Somehow, it’s been a faster process for me to see a poem as finished and ready for the world. If you had told me 4 years ago that this would be the case, I wouldn’t have believed it. I had work published in Rabid Oak, Furtive Dalliance, Rose Quartz Magazine, and I have a piece accepted for the January issue of Mojave He[art] Review.

New Year’s resolutions aren’t really my style. Why do you need an arbitrary date to start bettering yourself, or changing in general? Life is always moving and changing. We should, too. Every year people ask me about my resolutions and I usually stumble through some form of “Oh shit, wait, that’s right, New Year’s is right after Christmas. That’s in a week.” And then I find my moment to disappear into the background and remove myself from the conversation, for fear of someone realizing that I have absolutely zero resolutions, and that I’m a failure for doing so.

But, I recently discovered the idea of a word or theme instead of specific resolutions, and I’m going to give it a try. As a big picture person, this seems more productive and (ironically) actionable than a declaration of “2019 is the year I start going to the gym!”

I’m going to be taking the LSAT. I plan on continuing to write and submit to journals in the new year. Hopefully we’ll be moving out of Wisconsin and back to the east coast. There’s more weddings for dear friends to go to in 2019, so more road trips are likely in our future. I want to put myself first and get stuff done, but I also want to be more open to new people and opportunities. I want to try new things and stop myself from saying “no” preemptively.

So, here goes nothing trying to wrap up a messy year in anticipation for fulfilling productivity.